Climate Change in the High Atlas

An article by Dr Benjamin Bell and the Leverhulme Trust Research Team, The University of Manchester

As the summer sun melts the winter snow across the High Atlas, look high enough, and you’ll still see patches of the white stuff high up in the peaks. These snow patches are just one of a series of clues which indicate that the climate of the High Atlas might have been very different in the past.

Now, a research team headed by Dr William Fletcher based at The University Manchester, UK, are investigating how climate in the region has changed, and how this may have shaped the landscape, and the people that live within it. The research project, Holocene glacier dynamics and environmental change in the High Atlas, Morocco is funded by the Leverhulme Trust, and aims to investigate the role of glaciers and snow fields in the High Atlas – and how these may have acted as 'water towers' to sustain and develop early Moroccan society.

The evidence for past glaciers lies all over the High Atlas, with large earth mounds and ridges littered with boulders (moraines), which map the extent of glaciation (Figure 1). 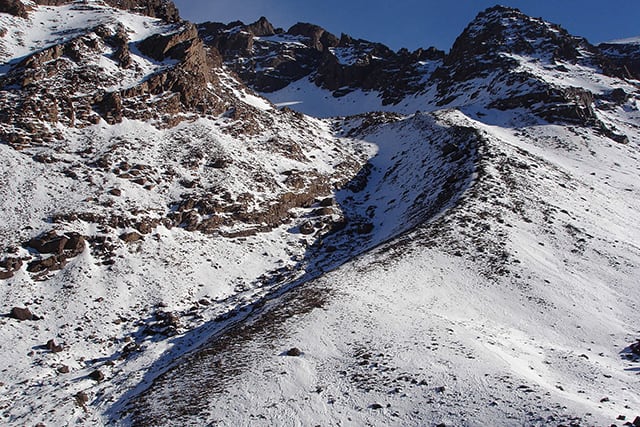 Figure 1. Moraines (the sweeping arcuate ridge on the right side of the valley) marking the limits of a former glacier in the High Atlas near Toubkal. Photograph by Philip Hughes.

From Imlil, the team will investigate the mountains for signs of glaciation in the landscape, around the highest peaks of Toubkal and beyond. Many of these glacial features date to the Ice Age but in some areas there is evidence of small glaciers and permanent snow that were present only a hundred years ago. Long-lasting snow is known to survive through the summer in some localities and below the huge northern cliffs of the Tazaghart Plateau (Figure 2) a permanent snowfield is marked on local maps as the "neve permanent". Today this feature is only semi-permanent, as in the hottest summers it is has been known to melt completely. "The state of this and other snow and ice features in the past in the High Atlas is important for understanding climate change in this region" says Professor Philip Hughes of the University of Manchester, who is coordinating the study of past glacier activity. 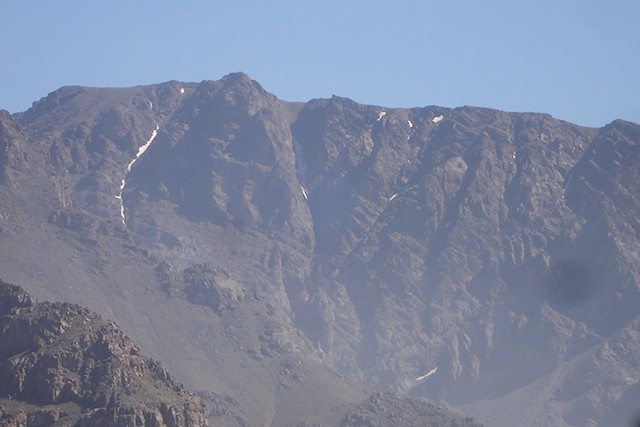 Figure 2. The north-facing cliffs of the Tazaghart Plateau. These cliffs hold some of the longest-lying snow in the Atlas Mountains and snow patches can be seen in gullies this photograph in late July 2008 from near the Tizi n'Tzikert pass. Photograph by Philip Hughes.

In order to understand when glaciers were present in the High Atlas, the team will date the moraines using an advanced technique called cosmogenic nuclide dating in collaboration with Dr David Fink at the Australian Nuclear Science and Technology Organisation (ANSTO). This technique measures cosmogenic nuclides which form in the boulders when they are exposed to cosmic rays. This process begins when the glacier starts to retreat, and it deposits the boulders in situ. Therefore, the age signifies the period of time that has passed since the last glaciers were present.

Alongside this research, PhD student Henk Cornelissen is investigating the vegetation history of the area, identifying pollen grains of different plant species in long sediment cores taken from wetlands in the High Atlas. Pollen is extremely resistant to decay and can survive long periods in waterlogged ground. Over time, as the ground builds up from decaying plant material, new soil formation and dust input, it creates an archive of the changing vegetation of the region, which can be recovered by sediment coring (Figure 3). 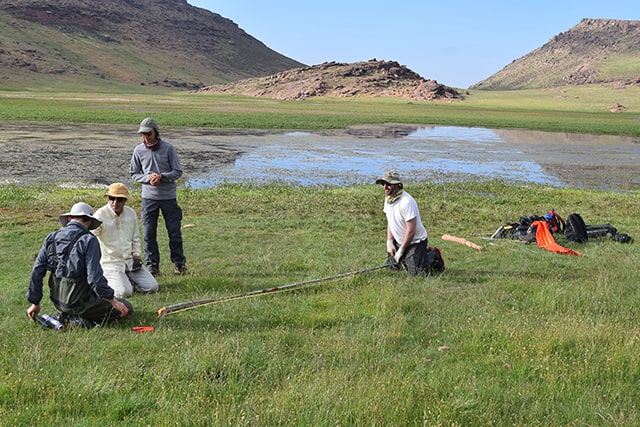 Figure 3. Sediment coring on the Yagour Plateau in June 2019. Photograph by William Fletcher.

Changes in past vegetation, identified by microscopic identification of the pollen and dated by radiocarbon analysis, give clues to the type of climate, whether hot or cold, dry or wet, and this can be linked to glaciation in the High Atlas. Also present in the sediment cores are clues to human activity. This could be from the type of vegetation, such as walnut tree or cereal crop pollen – evidence of farming activity, or spores from fungi which grow as a result of animal grazing. All of this evidence allows a picture of climate and environmental change, and of human activity to be built, to tell us about the history of the High Atlas.

Since the start of the project, the team have collected rock samples from the Aremd valley (near Imlil) and collected a sediment core from the Yagour Plateau (south-east of Marrakech), working closely with Professor Ali Rhoujjati of the University of Marrakech Cadi Ayyad and Dr Abdelhadi Eawague of Chouaib Doukkali University, El Jadida. Several more trips are planned to this and other sites around the area. William Fletcher sums up the importance of the project "the Marrakech High Atlas offers a remarkable opportunity to bring together multiple lines of evidence to understand environmental change in North Africa since the ice age."

Discover Ltd, and the staff at Kasbah du Toubkal and Dar Imlil have for a long time been an important partner with The University of Manchester with student fieldtrips running every year in spring since 2009 and many research trips since 2007. This has included research previously funded by Leverhulme Trust as well the Royal Geographical Society (with Institute of British Geographers). This partnership highlights the importance of the Kasbah du Toubkal as a world-leading field centre for both teaching and research. The Kasbah and Dar Imlil will provide the venue for this new project, which runs until 2021. At the end of the project the Kasbah will provide the venue for the final workshop which will gather together the research team, local collaborators and scientific colleagues from around the world.

You can read more about the project, and keep up to date with its progress through its website: https://www.highatlasresearch.com or through Twitter: @HighAtlas_sci